Today our blog puts the Spotlight on Author Thomas Cobb. He is the author of the novel: Crazy Heart. His book was adapted into the 2010 Academy Award winning 2009 film Crazy Heart.


Author Description:
Thomas Cobb is an American novelist and author of Crazy Heart which was adapted into the 2010 Academy Award winning 2009 film Crazy Heart. Cobb attended the University of Houston, where he studied fiction writing with Donald Barthelme. Barthelme also advised him on the writing of Crazy Heart. Thomas Cobb has taught at Eastern Arizona College and in the Arizona State Prison System. He is a retired Professor of English at Rhode Island College. He taught fiction writing and literature, and was the director of the program for 18 years. In 2010 he received the Rhode Island College Alumni Faculty Award.

Let’s start with what’s next. Are you taking your readers back to the desert? Can you tell us the timeline for its release and give us a little tease?

I'm working on a novel that takes place in New England. It's contemporary and involves a murder, though I think it's closer to An American Tragedy than a mystery or crime novel. I should be done with it this summer, so look for it a year after that.

Like most veteran, established authors you have stayed away from social media and their relationships. Have you thought about jumping into the swirling water or is traditional marketing going to remain your choice?

Do you do a lot of book signing, interviews, speaking and personal appearances? When and where is the next place where your readers can see you? Where can they keep up with your personal contacts online?

I do stay away from social media, though I expect to do more of it in the coming months. I prefer the personal contact I get from doing readings and signings, and I do as many of those as I can; likewise, interviews in print and broadcast media. I enjoy getting to meet and talk with readers. When you work alone for a couple of years on a novel, it's a special treat to meet a reader face to face. I do always answer emails that come to my website www.thomascobb.net.

And I list coming events there--like a reading in Houston on the 22nd of April.

I usually have no input on my covers, and I usually hate them. With With Blood in their Eyes, I did have quite a bit of contact with the designer, and I like the final product a lot. It's my favorite cover of all of them. Next to that is the movie tie-in Crazy Heart with Jeff's picture on the cover.

Have you thought about creating book trailers for any of your books to promote them online? (I inserted the Crazy Heart YouTube trailer below.)

You know, I have never even thought about that. It's something I'll have to consider.

That's one of those good news/bad news items, isn't it? It allows more people to hear you read, but it minimizes the contact between writer and reader. I would hate to have them replace actually getting out on the road and reading to a real audience.

Has the advent of ebooks changed anything in your writing, your marketing and the relationship with your readers and fans?

Certainly the ability to notify people of upcoming events in various locals is a good change, as is the ability to get reviews out where people can see them is really helpful changes.

Occasionally I will have to write out a list of characters if there are a lot--as there are in Shavetail or this new one. Likewise, I kept a timetable for Shavetail. I have also drawn a map of the fictional town in the new one. Other than that, no. I keep everything in my head. I never use outlines. I write pretty much every day, and I go back and reread quite a bit, looking for things I can use later in the book. That keeps me grounded in the story.

Do you publish your books in other languages? How is your audience abroad?

Crazy Heart has been published in several languages, including Czech and Swedish. And, actually, I never hear anything from readers abroad. I don't think the publishers forward messages.

Now to your students. Teaching fiction writing must a rewarding experience. Have you ever collaborated with your students and published the works? Has the Internet changed your approach to your teaching methods and to the content produced?

As I noted. I'm retired now, and I'm still in contact with many of my students, but no, we don't collaborate. Writing is a very solitary thing for me.

It must have been a thrill to see your novel on the big screen. Can you tell us how that opportunity came about? How much input did you have in the screenplay and the making of the movie?

I had no input in the movie at all. It was Scott Cooper's first film, and I'm pretty sure he didn't want any distraction from me. The road to the movies was a long one. The movie was made twenty years after the book, and the book had been under option more than a dozen times before Scott actually got the movie made. I had pretty much given up hope that it would get made. I'm happy with the result and grateful to Scott for doing such a respectful adaptation. 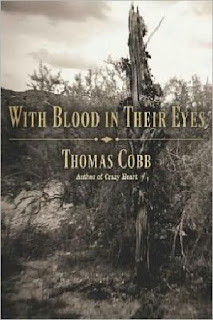 With Blood in Their Eyes
On February 10, 1918, John Power woke to the sound of bells and horses’ hooves. He was sharing a cabin near the family mine with his brother Tom and their father Jeff; hired man Tom Sisson was also nearby. Then gunfire erupted, and so began the day when the Power brothers engaged the Graham County Sheriff’s Department in the bloodiest shootout in Arizona history.

Now Thomas Cobb, author of Crazy Heart and Shavetail, has taken up the story in this powerful and meticulously researched nonfiction novel. What seems at first a simple tale of crime and pursuit takes on much greater meaning and complexity as the story traces the past lives of the main characters and interconnects them—all leading back to the deadly confrontation that begins the book. Cobb cunningly weaves the story of the Power brothers’ escape with flashbacks of the boys’ father’s life and his struggle to make a living ranching, logging, and mining in the West around the turn of the century. Deftly drawn characters and cleverly concealed motivations work seamlessly to blend a compelling family history with a desperate story of the brothers as they attempt to escape. 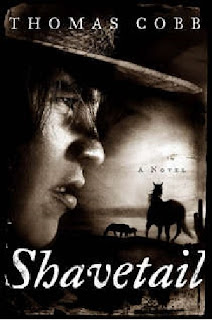 Shavetail
Winner of the 2009 Spur Award for Long Fiction

Seventeen-year-old Ned Thorne lied his way into the U.S. Army, and is sent to the remote Fort Ramsey, deep in Arizona Territory. There, his young eyes will be opened to the true beauty and savage barbarity of the American frontier.

When a local ranch is attacked by Apaches and a young woman taken into bondage, Ned and the rest of his patrol will endure a suicidal march through mountains and wilderness, into the badlands of Mexico, and beyond the limits of human endurance to save the woman's life. 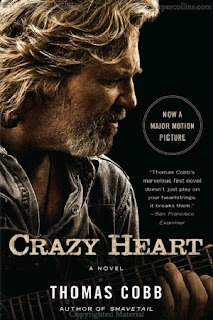 Posted by James Moushon at 7:42 AM