Today our blog puts the Spotlight on Author David Brin. He is the award-winning bestselling Author, Scientist and Futurist with such books to his credit as: The Transparent Society, Existence, Earth and The Postman.


Author Description:
David Brin is a scientist, public speaker and world-known author. His novels have been New York Times Bestsellers, winning multiple Hugo, Nebula and other awards. At least a dozen have been translated into more than twenty languages.

David's latest novel - Existence - is set forty years ahead, in a near future when human survival seems to teeter along not just on one tightrope, but dozens, with as many hopeful trends and breakthroughs as dangers... a world we already see ahead. Only one day an astronaut snares a small, crystalline object from space. It appears to contain a message, even visitors within. Peeling back layer after layer of motives and secrets may offer opportunities, or deadly peril.

David's non-fiction book -- The Transparent Society: Will Technology Make Us Choose Between Freedom and Privacy? -- deals with secrecy in the modern world. It won the Freedom of Speech Award from the American Library Association.

A 1998 movie, directed by Kevin Costner, was loosely based on his post-apocalyptic novel, The Postman. Brin's 1989 ecological thriller - Earth - foreshadowed global warming, cyberwarfare and near-future trends such as the World Wide Web. David's novel Kiln People has been called a book of ideas disguised as a fast-moving and fun noir detective story, set in a future when new technology enables people to physically be in more than two places at once. A hardcover graphic novel The Life Eaters explored alternate outcomes to WWII, winning nominations and high praise.

Brin serves on advisory committees dealing with subjects as diverse as national defense and homeland security, astronomy and space exploration, SETI and nanotechnology, future/prediction and philanthropy.

As a public speaker, Brin shares unique insights -- serious and humorous -- about ways that changing technology may affect our future lives. He appears frequently on TV, including several episodes of "The Universe" and History Channel's "Life After People." He also was a regular cast member on "The ArciTECHS."

Brin's scientific work covers an eclectic range of topics, from astronautics, astronomy, and optics to alternative dispute resolution and the role of neoteny in human evolution. His Ph.D in Physics from UCSD - the University of California at San Diego (the lab of nobelist Hannes Alfven) - followed a masters in optics and an undergraduate degree in astrophysics from Caltech. He was a postdoctoral fellow at the California Space Institute. His technical patents directly confront some of the faults of old-fashioned screen-based interaction, aiming to improve the way human beings converse online.

Brin lives in San Diego County with his wife and three children.

What do you have on the drawing board next? Can you tell us the timeline for its release and give us a little tease?

Readers have been patiently awaiting for 30 years for my return to the planet Kithrup where (at the end of STARTIDE RISING) I left a small crew of dolphins and humans who must protect a secret that will rock five galaxies. I figure it's time to keep that promise.

You have a good following on Twitter. How important have your social media relationships been? How much has it changed your book launch process?

Social media can be very useful and I try to keep up with the best techniques. After all, in EARTH (1989) I had web pages before there was a web and predicted many of the advantages… and problems … of digital, two-way media. Still, I have found that it is very important not to let it all vampire away your time to read, to write and to enjoy the outdoors. Especially to write.

You do a lot of video presentations, interviews, speaking and personal appearances? When and where is the next place where your readers can see you? Where can they keep up with your personal contacts online?

My web site is one of the most extensive author web presences around, with a good listing of coming events. The good news? You'll find heaps of meaty content in dozens of categories. The bad news is that creating all that stuff -- while interesting -- has subtracted from my fiction, which should be my main livelihood. It's what people around the world seem to think I do best.

I enjoyed watching your Youtube presentations. What advice can you give to authors about the importance of using video in their marketing effort?

We are entering an era when it will be rare for written fiction to stand entirely alone. Oh, I love the power of the autonomous novel. But it is becoming easier to enhance the experience. For example, in EARTH I included "links" (way back in 1989) that already crudely expanded the main storyline and that could now pop over to broad experiences - and some young artists want to do that.

The best recent example was my collaboration with the great web artist Patrick Farley (electricsheepcomix.com)
on a gorgeous and very dramatic 3 minute video trailer for EXISTENCE. At the opposite end are YouTube spoken missives that range from simple chapter readings to advice for new writers and freshmen heading off to college.

Always the goal remains the same… to entertain. To have folks go: "Huh… interesting!" And for them to want more.

I am at a level where the publisher consults with me and tries to keep me happy… but I ain't J. K. Rowling.

Indeed, though, I get sent a lot of fan-generated art. It is so cool to see beautiful scenes inspired by pages that I wrote. Often they are more lovely than anything I ever imagined. We are collaborators!

You have several great book trailers. (See links below.) Do you know how much impact they have had on your book’s success? Tell us about the process that you used to create your trailers? They look very professional. Do you use the trailer in your character development? Are the pictures and background the way you see your characters and scenes?

I need to add this note: Authors should read your blog: Help Make a Trailer for my next book?

Well, I mentioned Patrick Farley. I think he is spectacularly talented and folks should look up his other works. For EXISTENCE he hand painted 3 minutes of wonderful renditions of scenes from the book, stitched together with great drama. (http://www.tinyurl.com/exist-trailer).


My wife did some more standard 1 minute trailers for HEART OF THE COMET and for GLORY SEASON, using Ken Burns Effect pans across book covers and I thought the results were outstanding. Folks can view them under "books" at http://www.davidbrin.com.


Has the advent of ebooks changed anything in your writing, your marketing and the relationship with your readers and fans?

Not so far… but it will happen soon. I am already offering individual short stories that have proved very popular. And my two story collections. Soon I shall be offering whole novels.

I've long contributed copies to charity auctions, shelters, military base libraries. Lately, also giveaway contests on Goodreads etc. But I must be careful, or the tsunami of requests becomes overwhelming.

I do keep notes. And I was born to use computers… bought my first in 1980! But charts? No. Given how ornate books like EXISTENCE can be, you'd think I did. But no. It's mostly in the skull.

You have a great blog and website. You do a great job keeping readers informed, marketing your books and providing useful information to other writers. What is your primary goal?

To be a lively, interesting and active participant in a civilization where some folks care more about questions than about rigid dogmas and marching to the tune obeyed by their neighbors. I write for contrarians and ornery types who want their assumptions challenged. I will never get rich that way! But it is a large enough niche market to keep my family fed.

You published Postman and several other novels in different languages. How is your audience abroad? Does the SF genre drive the foreign sales?

A civilization's creativity and future orientation can be measured by the health of its sci fi tradition. I am pleased to say there are signs of an exciting new wave of science fiction in China. That bodes well (if it continues) for our future.

You not only write great SF novels and short stories but it appears you live and work in and around that futuristic world. Had you ever thought about writing something in a different genre?

I have written mysteries and tense suspense… (and when I teach writing I urge students to start with a murder mystery). Oh, sure, they all wind up being categorized as science fiction, because I am fascinated by CHANGE and how we humans react to it. Change is the one salient feature of our times. Any genre that ignores this is not trying to be relevant. It is hiding. 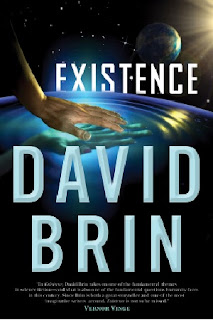 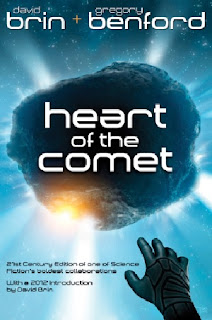 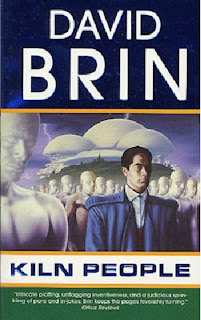 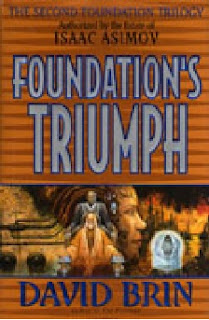 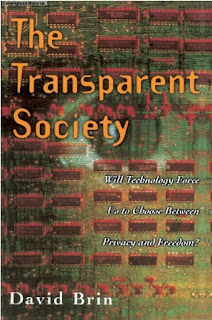 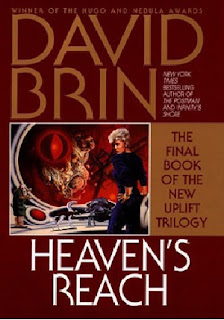 Heaven's Reach - The Second Uplift Trilogy #3
Winner of the Nebula and Hugo Awards, David Brin brings his bestselling Uplift series to a magnificent conclusion with his most imaginative and powerful novel to date--the shattering epic of a universe poised on the brink of revelation...or annihilation. The brutal enemy that has relentlessly pursued them for centuries has arrived. Now the fugitive settlers of Jijo--both human and alien--brace for a final confrontation. The Jijoans' only hope is the Earthship Streaker, crewed by uplifted dolphins and commanded by an untested human. Yet more than just the fate of Jijo hangs in the balance. For Streaker carries a cargo of ancient artifacts that may unlock the secret of those who first brought intelligent life to the Galaxies. Many believe a dire prophecy has come to pass: an age of terrifying changes that could end Galactic civilization. As dozens of white dwarf stars stand ready to explode, the survival of sentient life in the universe rests on the most improbable dream of all--that age-old antagonists of different races can at last recognize the unity of all consciousness.
--------------------------------------------------------------------------------------------------------------------------
Order the Book From: Amazon - Barnes and Noble 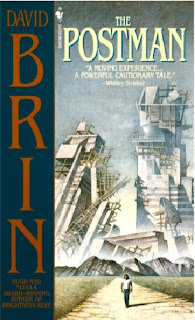 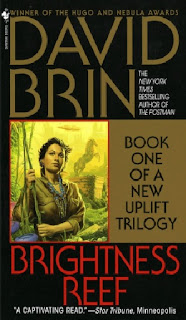 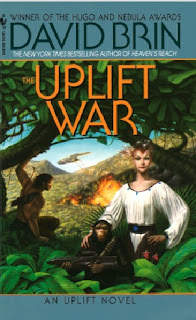 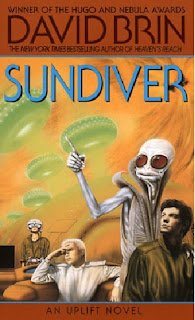 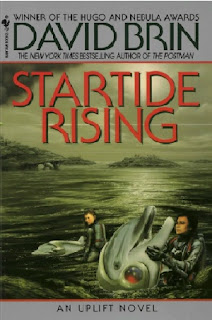 Posted by James Moushon at 7:40 AM