Today the HBS Author's Spotlight is showcasing The Fantasy World of M.R. Mathias. Join him in his October Fantasy Giveaways. Filled with Action and Adventure plus Sword and Sorcery.

The schedule for the FREE short stories follows:

Author M.R. Mathias is an award-winning self-published Fantasy Writer. He is noted for his epic fantasy novels and short stories and his prolific social network marketing activity. TWO HEARTS UNDONE. The series has won several awards including:

The Fantasy World of M.R. Mathias

Author Description:
M.R. Mathias rose from unknown to award-winning, best-selling author at a pace most authors can only dream about. He is a prolific writer of epic fantasy novels, novellas, and short stories. Despite his busy writing, publishing, and promotional schedule Mathias continues to aid his fellow indie authors by posting about their books at Twitter and Facebook etc.

He shared his considerable knowledge of self-promotion in publishing The First Ten Steps. The book has become an important indie guide for navigating the often murky waters of using social media sites to get your eBook in front of avid readers.

*From the Author The jewel you see glowing in the ring in my old authors photo isn't really a jewel at all. It is the crystallized tear of a real dragon. In my novel "The Royal Dragoneers" you might find the moment where this wonderfully magical teardrop fell from a green dragon's eye, and captured all sorts of magic in its facets.

My grandfather died before I was born, but the ring was given to me by my mother, after my grandmother recently died. My grandfather apparently won it in a poker game near the Red River between Texas and Oklahoma sometime in the early 1900's.

It has been a boon, the magic of the dragon's tear ring, for it brought you here to me didn't it? Now treat yourself to something fantastic and try out the free sample of one of my novels. I hope you enjoy the journey. It will be spectacular. Thank you, M.R. Mathias 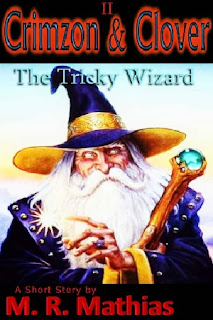 After racing off to save a pair of poisoned orphans, Clover soon learns that she, and her dragon Crimzon, might have been duped. Is the round old wizard who summoned her what he seems? Or did he lure them into his trap? Excitement and magic await in this second installment of the Crimson & Clover short story series. 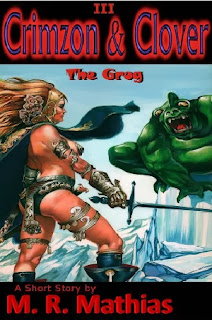 Clover gets caught up in a fine mess of treachery and frigid betrayal in this exciting short story about a lucky girl who demands respect from all who know her. 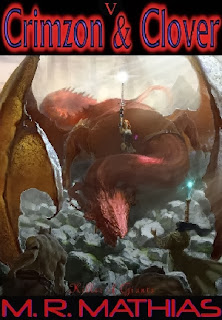 As with all the Crimzon and Clover tales, this is a short story of about 25 standard book pages.

In this episode, Crimzon and Clover have settled in the mountains of Kar, where King Amothy rules the men, and tribes of savage Karsithian giants roam the peaks. To enlarge their hoard our beloved dragon and his rider have started taking sacks of kingdom jewels for odd jobs here and there. Jobs such as searching out lost trade ships and keeping the Karsithian fighters from harassing the good people of the realm. Things get out of hand after some dwarven miners in Crimzon's employ are killed for digging to near a Karsithian tomb. To make matters worse some strange ghastly thing has started killing the mountain fae and taking over the minds of the Kar.

Crimzon's anger, and Clover's wit will be pitted against teams of giant warriors, and a creature that just might prove to be too much for them to handle. 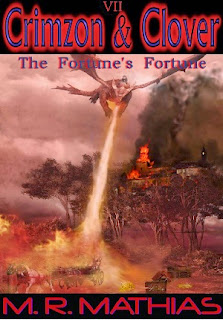 What do a handsome henchman, an unlucky duke, and one of the biggest gambling houses in the kingdom of Kar have in common? When Clover, the luckiest girl around, loses and finds out they are cheating the customers, she reminds them all of some age old wisdom: Don't mess with a girl with a dragon! 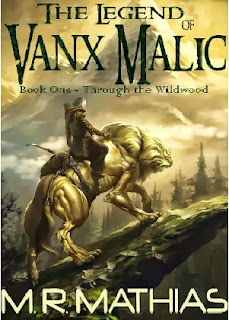 The Legend of Vanx Malic

A half-zythian bard named Vanx is in slave chains for bedding the Duchess of Highlake. The Duke wants him dead. This is bad news, for bad things can happen to an ill guarded slave caravan in the mountains. When the duke's men attack to kill the adulterous prisoner all hell breaks loose leaving Vanx only one way to go... Through the Wildwood 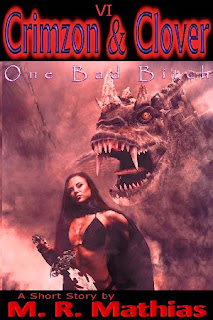 The ruler of the small kingdom of Mythka has stolen some gold from the dwarven mines Crimzon and Clover watch over for King Amothy. It isn't wise to mess with a girl with a dragon, especially Clover, who decides that a one on one showdown between her and the thief king himself, in his own arena, is the best way to handle things. Don't miss this 25 page short story that is #6 in the Crimzon and Clover Short Story Series. 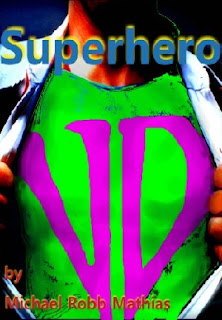 This is a Short Story about the realities of modern heroism. There is alot of ironic comedy and a deep message about the state of man here.

With a name like the Valiant Defender and a huge logo that says V.D. across his chest, you can imagine how Marvin Smithers is recieved when he foils a crime and becomes a national media hero. 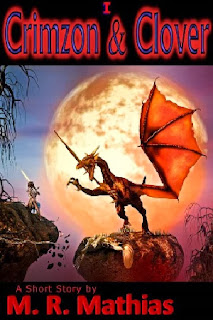 It isn't wise to mess with a girl and her dragon, at least not these two.

A young dragon, named Crimzariathon, loses his mother to lair raiders and is left to fend for himself. A lucky girl, aptly named Clover, happens upon him and together they form a lasting bond. When more men come to raid the lair the two are forced to defend themselves, and each other, in a wicked battle. Magic, swordplay, and dragon riding glory await in this satisfying 25 page short story. Crimzon & Clover One - Orphaned Dragon, Lucky Girl, is also available as a FREE Audio Book MP3 Narrated by Christine Padovan (( goo.gl/6PfMR )) This is a great read along combo! 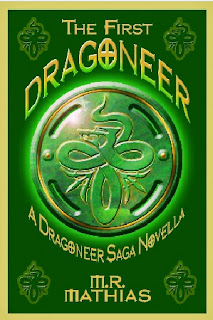 The First Dragoneer is an intro to the Dragoneer Saga. I wrote it in 2009, before I could consider myself a writer. The characters are young, but the story wasn't written to be YA. Many reviewers believe it, and the rest of the Dragoneer Saga, is. In fantasy, I don't really think it matters all that much. The Royal Dragoneers, the first full length novel in the series, is just 2.99 for a limited time.

If you like dragons, action, and adventure, you may enjoy these books. I definately enjoyed bringing them to fruition. Hold on to your dragon! - M. R. Mathias
The First Dragoneer

When two young men go on a hunt that they know will probably be the last hunt of their youth, they decide they want it to be an unforgettable outting.

When they cross a ridge and leave the unprotected, unpatrolled boundary of their kingdom, they find a cavern that looks like it needs to be explored.

Inside the cavern they find exactly what they were looking for. For residing in the darkened depths of this stoney hole is something that they will never forget......

That is, if they live long enough to remember it! 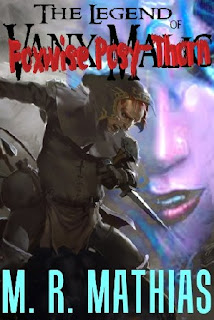 The Legend of Vanx Malic Book 0

Deep in the Lurr Forest, there is a valley called Saint Elm's Deep. This secret valley remains in a perpetual state of spring and hosts the thousands of fae who live there. The Heart Tree's magic sustains the boundaries that protect them all and their lush forest, but the Hoar Witch has poisoned its roots.

Queen Corydalis needs a certain shard to cast a beckoning so that the Emerald-eyed Champion of lore might come and save them all, for he is the only one who can end the Hoar Witch. If they hope to save the Heart Tree, that deed must be done.

Join Thorn, Bristle and Barb, the Pixie Queen's fiercest, smartest and most loyal elves as they take a thrilling journey out of their protected world into true Overland, where danger hides around every corner and everything they have ever loved is at stake. 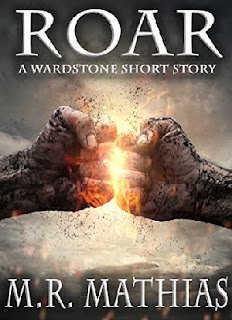 A fantasy "Short Story" about a gambling Seawardsman named Loudin, and the Lion Lord of Westland. These events happened a handful of years before The Wardstone Trilogy begins. You will find both characters in the #1 bestselling fantasy epic The Wardstone Trilogy, which starts with book one, The Sword and the Dragon. 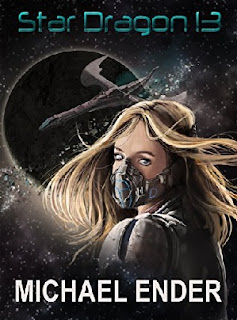 First Officer Adrianna Archa must take control of Star Dragon 13, one of the Legion's top secret, deep space defenders. Caught in the middle of what might be a trap, the captain tries to blow the ship to protect its classified technology. When Adrianna figures out who was the bait, and what their role was supposed to have been, they learn that just surviving might mean being branded as traitors. In the end, the only way they can prove their loyalty is to finish the mission, no matter how desperate the odds. 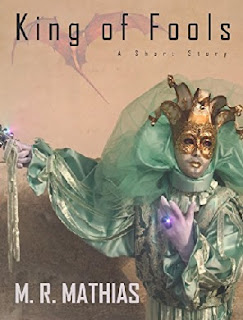 The King of Fools

A Fool must save his kingdom from a tyrant with a dolt for a jester in this hilarious, tale of majestic, motley, mockery. 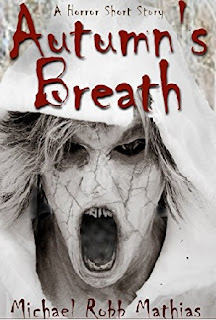 A high school senior named Autumn finds terror and mayhem in a town surrounded by corn fields. Murder, missing students, and a sheriff who wants no part of it, all get tangled in the events that take place when it snows on Halloween. This is what happens when hell freezes over.

Some links may be connected to Associate sites. Sponsored by: HBSystems Publications
Publisher of ebooks, writing industry blogger and the sponsor of the following blogs:
HBS Author's Spotlight
eBook Author’s Corner
HBS Mystery Reader’s Circle
Posted by James Moushon at 7:42 AM