He is an award-winning self-published Fantasy Writer. He is noted for his epic fantasy novels and his prolific social network marketing activity. 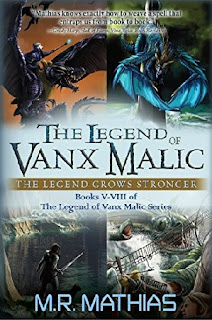 This bundle contains: Trigon Daze Paragon Dracus The Far Side of Creation and The Long Journey Home All from the #1 Bestselling Kindle Action and Adventure, Fantasy, series: The Legend of Vanx Malic, written by multiple award winning author, M. R. Mathias 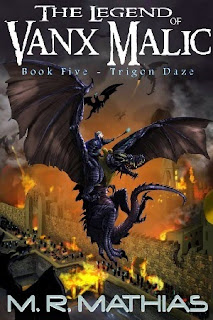 The Legend of Vanx Malic Book 5

In a piece of the Mirror of Portent, Vanx Malic sees the forces of the mysterious Trigon destroying Parydon Isle. This strange new enemy, with ensorcelled fighters, dragon riding wizards, and a nearly perfect battle plan, find little resistance in this future vision. After sending Gallarael to warn her brother, the Crown Prince of Parydon, about the invasion, Vanx sees the Trigon attacking his homeland, in the mirror. Deep inside he knows he has to go warn them.

Forced to torture information out of the cocooned Hoarwitch, Vanx learns how to free the gargan outcast, Chelda from the Underland binding that keeps her trapped in the Shadowmane. He also learns how to transport his crew of treacherous friends to Zyth.

Together Vanx and his dog familiar, Sir Poopsalot, Thorn, Chelda Flar and her elven lover, Moonsey, along with Gallarael, Prince Russet and a host of others, give all they have to keep the Trigon from destroying the Heart Tree.

Soon they learn that there is another, even more potent, force that drives the Trigon. This force is known as the Paragon Dracus, and stopping it just might prove to be impossible.

Even still, Vanx Malic is going to try, Join him in this, non stop, action and adventure fantasy that you wont be able to put down. 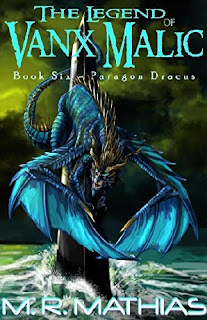 The Legend of Vanx Malic Book 6

Vanx, his full blooded Zythian friend Zeezle Croyle, Gallarael, and Chelda Flar, set out for Dragon Isle, to hunt down the terrible force who calls himself Paragon Dracus, but they soon find they've underestimated its power.

Meanwhile, King Russet Oakarm, his small group of Zythian wizards, and his hand-picked soldiers, begin rounding up stray Parydonians and spreading the word across the kingdom lands that his father has been dazed by the evil, shape-shifting creature's entrancing trident, and is no longer the true king. In fact Russet's father wants nothing more than to kill him, just as the Paragon ordered.

When the unthinkable happens, and Vanx Malic is taken by the Trigon Daze, his crew, and all those who love him, will be forced to attempt the impossible to save him.

Odds are, they don't stand a chance against something as ancient and powerful as this foe, but sometimes a common threat can cause a lifelong enemy to become an ally. Sometimes to win the day you have to make a deal with a devil. Don't miss this one. Vanx Malic Book Six will blow you away. 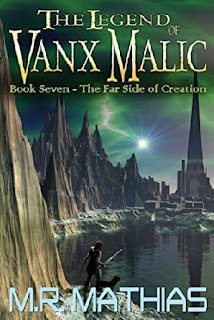 The Far Side of Creation

The Legend of Vanx Malic Book 7

After seeing Gallareal killed, and banishing the Paragon Dracus from the Heart Tree's side of the world, Vanx from the little Zythian village called, Malic, and his canine familiar, Sir Poopsalot, find themselves alone in a strange part of Harthgar. The Octrant tower, at least the one they appeared in, is unusable, and the rough, seemingly uninhabited land proves unlivable, even for one as skilled as our half-Zythian hero. But all Vanx wants to do is get he and his dog, back to Saint Elm's Deep, where he can grieve over the loss of the first woman he'd ever really let into his heart.

Will Vanx and Poops survive long enough to find a way? Or will the blue-glowing, dragon torturing, Paragon shape shifter want revenge? After all, Vanx is on its turf now, and he may be in for more than he can handle.

Vanx just wants to go home, but he may end up having to stick around until he finishes what's been started. 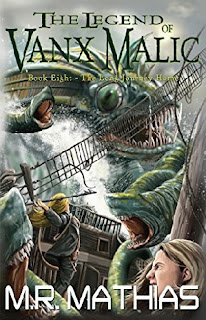 The Legend of Vanx Malic Book 8

After following a crazy old wizard's map, to an island that no one else can see, Zeezle ends up on the edge of death.

Will Vanx be able to save his closest friend?

Will his goddess forgive him for losing his way?

All Vanx wants to do is get home to his lover, to see if she will go on the quest his goddess has commanded of him. But first, he has to retrieve another magical gem, from Falriggin's dungeon, on Three Tower Island.

Action and adventure at every turn. Love and loyalty, will be tested. Friendship and fate, will be pushed to their boundaries. Death and even life itself is at risk in, The Legend of Vanx Malic, book Eight, The Long Journey Home.

Posted by James Moushon at 7:06 AM