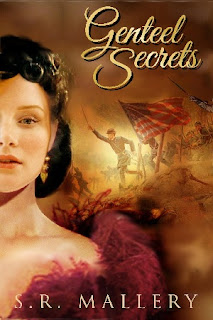 What do a well-bred Southern Belle and a Northern working class Pinkerton detective have in common? Espionage . . . and romance. At the start of the U.S. Civil War, while young men begin dying on American battlefields and slavery is headed toward its end, behind the scenes, female undercover work and Pinkerton intelligence are alive and well. But in the end, can this unlikely Romeo and Juliet couple’s love survive, or will they be just another casualty of war?

“The best portion of a good man’s life: his little nameless unremembered acts of kindness and love” ––William Wordsworth

James had had enough. His final medical exams finished, he was traveling home to New York soon, and the mere thought of drinking himself senseless with his graduating cronies seemed pointless somehow. Especially with all that was happening around the country in early 1861. In just Washington D. C. alone, he could see how much the city had changed since his arrival at the medical college the year before. And with the tall, lanky Lincoln newly elected, a tension was growing between his many Republican supporters and the few diehards who were quietly holding on to their southern sympathies.

Exhausted, James decided not to think of such matters this afternoon. With two pieces of leftover bread lodged in his pocket, he hurried along the streets to his favorite park bench. He chose to ignore the busy shopkeepers, the abolitionists handing out more potent leaflets, and the intermittent hammerings of the White House’s reconstruction.

No books, no note taking, no worrying about his future, this excursion was going to be his very own moment of peace and relaxation. He plunked himself down on a bench. Eyes closed, his face tilted up toward the sun beaming down its layer of warmth as he relished the calm after so many months of concentration and tension.

Soon, he became aware of another’s presence nearby and frowned. How dare someone invade his privacy at this park on this day, in his hour of need? He opened his eyes to spy on this person, this interloper. What he saw was a lovely girl sitting on the bench directly across from him. Absorbed in a book, she was obviously in her own world of words.

He could feel his heartbeat changing pace. No longer steady and slow, it was erratic and gathering speed at an alarming rate. When she casually lifted up her face to look at him, the rapid throbbing in his chest was threatening to take over his breathing. Her outfit spoke of generations of good breeding and money, yet her intelligent eyes hinted at something deeper, more original than the girls to whom he had been exposed.

Tongue-tied, he sought a good way to best spark up a conversation. Nervously, he withdrew his thick wedges of breakfast bread and started breaking off tiny pieces to toss onto the ground in front of him. Immediately, the flutter of pigeon wings sounded as a group of three landed in front of him, eagerly pecking at the treats before them.

“Oh, my, what a delight!” The girl clapped her hands and laughed.

“Of course.” He stood up to make an approach. “Mind if I sit down?” For a split second, her eyes flashed wariness, but it was fleeting. He sat down at a respectable foot and one-half distance from her as more and more pigeons clustered around their feet. But when he handed over to her half of what was left of the bread, he quickly forgot about the pigeons and simply concentrated on her.

Up close, he analyzed her eyes. Visions of the complex tiger iron gems on his mother’s employer’s necklace so long ago came to mind. These girl’s eyes, these light brown ‘gems’––luminescent, unique––so reminiscent of the gems around the rich lady’s neck, drew him to her, clearing his brain of all else.

“See how earnestly their heads bob up and down!” She laughed.

He loved the deepness of her laugh. Not the weak giggle or titter of so many of the girls to whom he had been acquainted, but a surprisingly full, from-the-belly laugh that anchored him to her that much more. 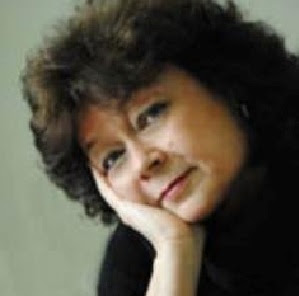 Author Description: S.R. Mallery, Gold Medalist winner of the 2016 READER'S FAVORITE Book Awards for Anthologies and 2017 READERS' FAVORITE Gold medalist for Historical Fiction Personage, has been labeled nothing short of 'eclectic'. She has been a singer, a calligrapher, a quilt designer, and an ESL teacher. As a writer, History is her focus and is woven into her stories with a delicate thread. When people talk about the news of the day, or listen to music, Sarah's imagination likens the story to a similar kind of news in the past and is conjuring up scenes between characters she has yet to meet. 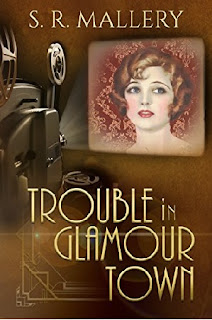 Trouble In Glamour Town
Hollywood, 1926. Where actors’ and actresses’ dreams can come true. But do they? While silent screen movie stars reign supreme, a film producer is gunned down in cold blood. Enter Rosie, a pretty bit-player and her bitter, stage-mother, Beatrice. As real celebrities of the time, such as Clara Bow, Lon Chaney, Gloria Swanson, and Rudolph Valentino float in and out, a chase to find the killer exposes the true underbelly of Los Angeles––with all its corruption. 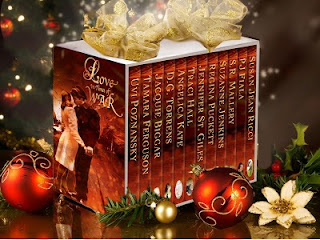 Love in Times of War - Boxed Set Romance Bundle - 12 Romance Stories
At no other point is passion put to the test as in dire times of war. From the American Civil War to WWII, from Vietnam to the War in Afghanistan to the Persian Gulf, the stories in this boxed set summon the strength of true lovers. Written by bestselling, award-winning, and USA Today authors, the novels and novellas in this collection tell of overcoming the odds to celebrate the victory of love.

If you like Military Romance, Wounded Warrior Romance, Historical Romance, Contemporary Romance, or Romantic Suspense, this anthology invites you to triumph over the worst of conditions. Together with these unforgettable lovers, go through coping with loss, struggling with injuries and rehabilitation, and facing difficult homecomings. And just like them, inspired by desire, find the courage to bring forth the best in us.

Dancing with Air by Uvi Poznansky In WWII London, Lenny is involved in a covert intelligence ploy. His task must remain confidential, even at the risk of Natasha becoming suspicious of him. Will their love survive the test of war?

Two Hearts Unspoken by Tamara Ferguson Beth Bowen is a single mom of an autistic son. Zach Logan is a wounded warrior searching for a life after Iraq. Can two lonely people discover that love is that something unspoken, missing from their lives?

The Rebel's Redemption by Jacquie Biggar When an old enemy follows him from Iraq and causes mayhem in Tidal Falls, can Jared overcome the odds to protect the woman he's always loved?

Broken Wings by D.G. Torrens Joshua, a bomb disposal expert in Afghanistan. Angelina, an editor of a local newspaper. Both avoiding love at all costs, until they are unexpectedly thrown together. Tested beyond belief… Can their love survive?

A Soldier’s Promise by Angelica Kate Ryker is most comfortable in the regulated world of the military. When he is sent to Darby’s doorstep to keep a promise to one of his fallen team members, every rule he holds will be challenged!

Returning Home by the Sea by Traci Hall Brayden and Zoe wed before he went to Iraq. Once united in passion, a lot has changed in the six years he's been away. Will their love survive his homecoming?

A Weldon Family Christmas by Jennifer St. Giles A frightening event with an uncertain outcome sends Emma and John's memory to the past, where her helicopter went down in Vietnam enemy territory, and he risked everything to save her. Can she save him now?

The Magic of Snow by Regina Puckett When Staff Sergeant Charlie Prince’s letters stop arriving from Afghanistan, Sarah White waits in agonizing suspense to discover what has happened to the man she loves.

Mademoiselle by Suzanne Jenkins To Philipa, working at Mademoiselle Magazine is more important than anything, even love. Her friend, Walter, hopes for a change, but not until his trip to the Persian Gulf does she begin to listen to her heart.

Genteel Secrets by S.R. Mallery In 1861 America, can the love between a Confederate female spy and the Pinkerton detective hired to shadow her survive, or will their story become just another casualty of war?

Moving to Forever by PJ Fiala Danny Schaefer returns from Afghanistan broken in body, battered in soul. Tammy Davis, betrayed in a most personal way, struggles against her tormentor. She and Danny must help each other heal, by the power of love.

Lovin’ Those Navy Games by Susan Jean Ricci Michael Burke has two passions: his high-school sweetheart and baseball. When someone dear to him perishes in Vietnam, will the shock alter his future goals? Will it isolate him from Ellie or deepen their love? 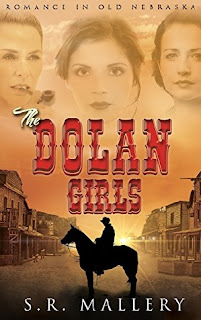 The Dolan Girls
The Dolan Girls by S. R. Mallery has it all. Set in Nebraska during the 1800s, whorehouse madams, ladies of the night, a schoolmarm, a Pinkerton detective, a Shakespeare-quoting old coot, brutal outlaws, and a horse-wrangler fill out the cast of characters. Added to the mix are colorful descriptions of an 1856 land rush, Buffalo Bill and his Wild West Show, Annie Oakley, bank/train robberies, small town local politics, and of course, romance. Two, in fact! 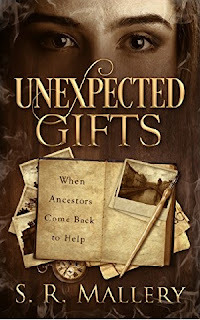 Unexpected Gifts
A TRUE AMERICAN FAMILY SAGA: Can we learn from our ancestors? Do our relatives’ behaviors help shape our own?

In "Unexpected Gifts" that is precisely what happens to Sonia, a confused college student, heading for addictions and forever choosing the wrong man. Searching for answers, she begins to read her family’s diaries and journals from America’s past: the Vietnam War, Woodstock, and Timothy Leary era; Tupperware parties, McCarthyism, and Black Power; the Great Depression, dance marathons, and Eleanor Roosevelt; the immigrant experience and the Suffragists. Back and forth the book journeys, linking yesteryear with modern life until finally, by understanding her ancestors' hardships and faults, she gains enough clarity to make some right choices. 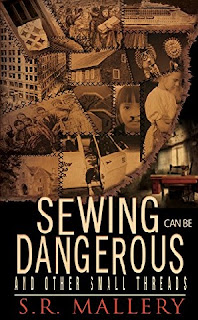 Sewing Can Be Dangerous and Other Small Threads
WHEN HISTORY, MYSTERY, ACTION, and ROMANCE ARE ALL ROLLED INTO ONE!

2016 GOLD MEDAL WINNER of Reader's Favorite contest in Anthologies, these eleven short stories range from drug traffickers using hand-woven wallets, to a U.S. slave sewing freedom codes into her quilts; from a cruise ship murder mystery with a quilt instructor and a NYPD police detective, to a couple hiding Christian passports into a comforter in Nazi Germany; from an old Salem Witchcraft wedding quilt curse to a young seamstress in the infamous Triangle Shirtwaist Factory fire; from a 1980's Romeo and Juliet romance between a Wall Street financial 'star' and an eclectic fiber artist, to a Haight-Ashbury love affair between a professor and a macramé artist gone horribly wrong, just to name a few. 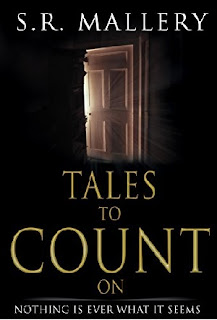 TALES TO COUNT ON
Curl up and enter the eclectic world of S. R. Mallery, where sad meets bizarre and deception meets humor; where history meets revenge and magic meets gothic. Whether it's 500 words or 5,000, these TALES TO COUNT ON, which include a battered women's shelter, childhood memories, Venetian love, magic photographs, PTDS fallout, sisters' tricks, WWII spies, the French Revolution, evil vaudevillians, and celebrity woes, will remind you that in the end, nothing is ever what it seems.

Check out the index of other Spotlight authors. Spotlight Index.
Posted by James Moushon at 6:17 AM