Amy Metz is an Author of Mystery & Thrillers as well as a blogger and book editor. She writes the Goose Pimple Junction series. 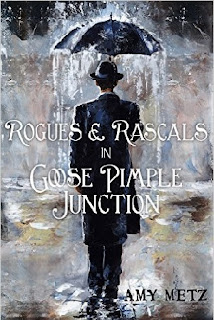 Like any good Southern belle, Caledonia Culpepper was raised by her mama to be gracious, charming, witty, and above all, a devoted mother and loving wife, so she's baffled when her marriage falls apart.

Wynona Baxter is a master of disguise but is often a ditzy airhead. A hit woman wannabe, when she's hired for her first job in Goose Pimple Junction and things don't go as planned, she's forced to resort to Plan B. She'll also need Plan C and D.

Crooked lawyers, restless husbands, a teenaged hoodlum – it seems there are rogues and rascals everywhere you look in Goose Pimple Junction.

When Caledonia and Wynona's paths cross, they prove there isn't a rogue or a rascal who can keep a good woman down. Mama always said there would be days like this . . .

A Unicorn And A Hit Woman

Early June, Atlanta, Georgia
Sipping sweet tea and browsing Facebook on her iPhone, Wynona Baxter sat with her partner, Zeke, at a table outside a coffee shop. With her toned and tanned bare legs crossed, her left foot—clad in Jimmy Choo black four-inch-heeled sandals—bobbed up and down to a silent beat known only to her.

“Here he comes.” Zeke adjusted his sunglasses and inclined his head toward the street.

There he was—their mark—right on time, wearing his JC Penny ugly tan blazer and brown polyester pants set right underneath his paunch. He ran a hand through his thinning red hair, but demonstrating the man’s definite need for a haircut, a long patch in the front dropped right back down over his right eye.

Wynona muttered, “Get a haircut.” Then to her partner, she said, “His confidence has to be ill-gotten.

Zeke harrumphed. “Just like everything he has in life.”

Over the rim of her glass of sweet tea, she casually watched as he crossed the street, speaking to a few people along the way. His gut preceded the rest of him by a good ten inches. Why on earth a man with no outwardly redeeming qualities—and from what she’d heard inwardly too—could strut like a rooster was beyond her.

Wynona put her glass down and ran her finger along the condensation. “I'll tell you one thing. It's obvious from the way he carries himself that there isn't any conceit in his family: he got it all.

Zeke sat back and propped a leg over a knee. “Yeah, but brains are another question.”

“You reckon he has any of those?” Wynona's foot continued to bob up and down.

The duo had been watching him, and after a week, they knew his routine. Wynona looked at her iPhone. “He's right on time and headed for the Dizzy Duck as usual.”

Zeke nodded. “If he hadn’t made someone very angry, this wouldn’t have to be his last visit there.”

“Okay. So he'll spend thirty to forty minutes in the bar and then head for home.” Wynona put the phone in her purse.

Zeke stood. “Where we'll be waiting for him.”

She took one more gulp of tea, shook the ice in the glass, and set it down hard on the table, shooting a look that would put frost on a snowman to the guy a few tables away who’d been leering at her for the better part of an hour. Leisurely standing, she smoothed the front of her short linen skirt. As she left the coffee shop, she was aware of the eyes on her . . . well, she could only guess which body part his eyes were on. Wynona preferred to be unobtrusive, but that was nearly impossible with her looks. But no matter, by tomorrow she’d appear totally different anyway. She thought she might enjoy being a redhead next.

The hot Atlanta sun beat down on them as Wynona and Zeke walked across the street in the opposite direction from the person they’d tailed for almost a week: Mr. Sleazy, as she’d come to think of him. They had been sitting at the outdoor table for over an hour waiting for their mark to leave his office building. Feeling like she was melting, bored half out of her skull, and glad to be on the move again, she got into their rented Lexus ES300 and turned the ignition key. She set the air conditioning to full blast and leaned her head against the headrest. The cool air blew across her face, which glowed with perspiration.

She glanced at the dashboard and groaned. “Is it really 104 degrees out there?”

Zeke adjusted the vents. “Considering the humidity is at least in the eighty percent range, it feels more like 150.”

Taking a lace hankie from her purse on the passenger seat, she blotted her face so as not to ruin her makeup. She fluffed the bangs of her brown wig and slipped on her oversized sunglasses before adjusting the air conditioning vents to point straight at her. After putting the car into drive, she eased out onto the road and secretly offered Mr. Googly Eyes an unladylike hand signal.

Wynona maneuvered the Lexus down the curvy shade-dappled country lane while singing along to Garth Brooks’s “Friends in Low Places” on the radio. She pulled off to the side of the road, stopping just in front of a black mailbox with white lettering that spelled “Reid.” The box stood to the right of a long driveway leading to a large colonial two-story house. This wasn’t Mr. Sleazy’s house but one just down the road from his ticky-tacky run-of-the-mill ranch house. After a few minutes, she was impatient. “Come on, you know this road has hardly any traffic. We've only seen a handful of cars in the six days we've been tailing Polyster Man.

Zeke cracked the car door, waited, and listened. The only sound was the rat-a-tat of a woodpecker. Convinced no cars were near, he hurried to the rear of the car as she popped the trunk. He pulled out a duffle bag and slid back into the car, laying the bag on the floor in front of the passenger seat.

“Now watch, Wynona. You might need to know how to do this some day. Pay attention.” Reaching under the clothing inside the bag, he pulled out the pieces of a Glock .40 caliber semi-automatic. Grabbing the slide, he took the barrel and slid it in, put in the guide rod and spring, keeping his thumb over it. With the weapon in his other hand, he said, “Make sure there are no obstructions, match the male/female grooves, slide it on, lock it to the rear, and put down the takedown lever at three o'clock.” He quickly snapped the pieces into place and screwed the silencer on.

Wynona recoiled a little when he opened his bag of tricks, as he liked to call his knife set. Her mind went over the different ways she'd seen him use each one in the past. A slow and torturous death was his specialty and why people asked for him.

Wynona glanced at the time on the dashboard. “I reckon we've spent five minutes cooling off after leaving the coffee shop and fifteen driving here. It should also take Sleazy fifteen minutes to get here—after his usual thirty minutes in the bar.” Wy reached in the bag, pulled out a CD, and popped it into the player. “If I Had Shot You When I Wanted To, I'd Be Out By Now” came over the speakers, and she tapped her fingers on the steering wheel as she sang along.

Zeke watched and said, “I love a girl with a sense of humor in this line of work.”

Twenty-five minutes later, she turned off the engine. They got out of the car, and he raised the hood. Zeke crouched in front of the car, while she leaned against the Lexus to wait.

She heard it before she saw it. “Showtime,” Wynona said.

“Do your stuff, Wy.” Zeke shifted slightly in the gravel.

She leaned in under the hood from the side of the Lexus that faced the oncoming car so that her long thoroughbred legs would have a chance to work their full magic. She heard the pop of gravel and an engine slowing as he eased his car to the side of the road.

“What’s the problem?” Mr. Sleazy asked as he approached her.

Holding the gun in his right hand, Zeke rose to his full height, walked past her, and pointed the weapon at Sleazy.

“Honey, you’re the problem.“ Wynona cocked her head. “But we’ve got the solution.” She noticed his Adam’s apple bob up and down; hers did too.

Walking toward him with the gun aimed at his chest, Zeke said, “You’ve made someone awfully mad with your low quantity of moral fiber. You pretended to be someone you’re not. You took advantage of people. You stole money from them. They said to make it a . . .” he stretched out his words, “. . . slow, painful end to your time here on earth.” 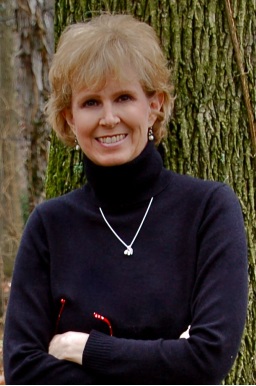 Author Description: Amy Metz is the author of the Goose Pimple Junction mystery series. She is a former first grade teacher and the mother of two sons. When not writing, enjoying her family, or surfing Pinterest, Amy can usually be found with a mixing spoon, camera, or book in one hand and a glass of sweet tea in the other. Amy lives in Louisville, Kentucky and loves a good Southern phrase. 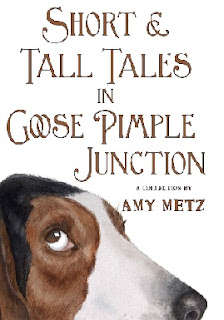 How did Johnny Butterfield become police chief?
How did Tess and Jack get engaged?
How did Ima Jean come to live with Louetta?
How do you celebrate an Apple Day? 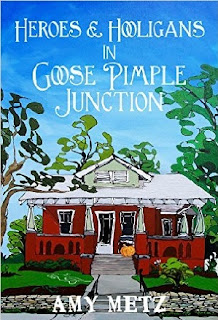 Heroes & Hooligans In Goose Pimple Junction - Goose Pimple Junction Mysteries Book 2
Goose Pimple Junction is just recovering from a kidnapping and a murder, its first major crimes in years, when trouble begins anew. Life is turned upside down in the quirky little southern town with the arrival of several shifty hooligans: A philandering husband intent on getting his wife back, another murderer loose in town, a stalker intent on frightening Martha Maye, and a thief who’s stealing the town blind of their pumpkins, pies, and peace. Together, they’re scaring the living daylights out of the residents and keeping the new police chief busier than a set of jumper cables at a redneck picnic. Suddenly, he has his hands full trying to apprehend a killer, stop a stalker, and fight his feelings for the damsel in distress. 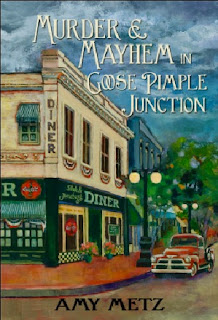 A bank robbery, murder, and family tragedy from the 1930s are pieces of the mystery that Tess attempts to solve. As she gets close to the truth, she encounters danger, mystery, a lot of southern charm, and a new temptation for which she’s not sure she’s ready.

Check out the index of other Spotlight authors. Spotlight Index.
Posted by James Moushon at 7:03 AM