Today our blog puts the Spotlight on Author John F. Hanley. He is a Historical Fiction and Young Adult Author. He hails from the UK.


Author Description:
Born in Jersey in 1946, John Hanley represented the island in swimming and water polo. Trained at the Guildhall School of Music and Drama, he taught in London, Jersey and Cornwall. After a master's degree at Bath University, he returned to Jersey as deputy head teacher of his old school. He retired in 2006 and now lives with his wife and family in South West Cornwall.

If you would like to know a little bit more about me and the background to Against The Tide, please listen to my interview with Kevin Pamplin on BBC Radio Jersey.”

Congratulations on your new novel: The Last Boat. What do you have on the drawing board next? Can you tell us the timeline for its release and give us a little tease?

The next book in the series is set in 1941 and once again takes place over a few weeks. It features the diamonds from the first book, Against The Tide, and takes place in France and Jersey. There is a new twist in Jack's story here though as he is recruited by Ian Fleming and has to work with a Russian agent – female of course but don't tell Caroline or Rachel! Given the lead time with publishing at present I don't expect it to be out there until the middle of 2014. It's provisional title is Room 39 (where Fleming worked in Naval Intelligence) but that might change.

You have a good following on twitter. How important have your social media relationships been? Do you see a carry over to your writing success?

Before Against The Tide was launched I was a twitter novice but I've found that networking has increased my profile and allowed me to meet a wide range of most interesting people many of them authors. I still struggle to really understand the true benefits of twitter though I'm gradually getting a grip of hash tags. Facebook is an even greater mystery but I try to keep my author page up to date.

Today there is a buzz in the industry about high rankings on retailer’s lists because of the use of on-line advertising sites. Have you ever promoted your books with paid advertising? What has been your experience?

I've used boost on Facebook a couple of times but it's difficult to measure that against sales as my publisher only reports on those infrequently. It's encouraging to see the reported reach of these boosts but I have no real evidence of their effect.

You have great covers. They carry a theme and your brand with them. How does your book cover creation process work? Do you hand over the basic theme or do you have more of a hands-on approach? Do you get your readers involved in its development?

I came up with the idea of the two divers as they were central to Against The Tide. My publisher provided design help though I sourced the image. This was from a commercial photo site and I had to pay a royalty fee to manipulate and use it. For The Last Boat which starts with the bombing and sinking of RMT Lancastria in June 1940 I found two dive bombers which seemed an appropriate echo of the two divers. I'm a stickler for historical detail but had to betray my principles to achieve the effect I wanted and used Ju 87 (Stuka) dive bombers which were not involved in that sinking as I failed to find the right image for the Ju 88s which were. Later in the story other twin engined German bombers Heinkel He 111s and Dornier Do 17s have a role to play but none of them could provide the image I wanted. I doubt whether many readers would be aware of these distinctions but I let imagery triumph over accuracy in order to preserve a brand. Will I be forgiven?

Have you created a book trailer for any of your books to promote them online? Your music background could be a natural for this.

I've seen other author's video trailers but so far I haven't made a start on this idea though I believe the music accompanying the splash pages on my website and supporting the text do have a positive impact on visitors.

What writer support groups do you belong too? Do they help with the writing, marketing and the publishing process?

I belong to the Alliance of Independent Authors (ALLI) as well as the Authors Social Media Support Group (ASMSG). Before I published the books I tested them on YouWriteOn.com which is an excellent site for feedback from other authors. At present I spend most of my marketing time working with ASMSG offering and receiving support from other authors.

The only books I gave away were to non-author friends on the understanding that they would write reviews in return. Most of them did oblige but few of them had any experience of or skill in reviewing though their 5 star ratings were helpful. My publisher persuaded me to use the Amazon Vine program which did produce some excellent well written reviews. They also distributed review copies through their database and to other sources I suggested. I do read about other authors' experience of giveaways but I'm not sure there is any real relationship between free copies and ultimate sales.

I use MS Access as a central database for my characters and as this is a series I'm constantly updating it. I use another program called Inspiration which was designed in the UK for schools but allows me to produce mind maps and other graphical images of plot lines and alternative branches.

You have a great blog. I like the music background. You do a great job keeping readers informed and marketing your books. What is your primary goal? And where in the world do you find the time to create great novels, take care of the social media and maintain your blog?

I'm afraid that I tend to neglect my blog and only post about my novels occasionally. My website was designed and is maintained by my publisher and, even though I can update it myself, I find the software a bit clunky! I did decide early on to provide extensive background information about my novels on the website especially as some readers might think that I was making it all up!! Against The Tide has been reissued as an ebook and I've added author's notes, timelines and more background detail after the epilogue. I've done the same for The Last Boat in both the ebook and paperback and included some promotional pages for Against The Tide. Finding time should be easy now that I'm retired but I often feel that I'm working harder and longer than I was when tied to my day job!

You have a unique selling/marketing situation. Where is your biggest audience? Does marketing online help in situation? Do you publish your books in other languages? How is your audience in the UK?

Initially I thought my biggest audience would be in Jersey where the first novel is set but, thanks to the Internet, it seems to be selling around the world. I did launch Against The Tide in Jersey at the exact location where the novel starts and even used the local water polo club to provide an exhibition match for the press. The story begins in the middle of a game in 1939 and sets up the struggle between Jack and Rudi, which lies at the core of the whole series with a bruising encounter. Because I already had a profile in Jersey, having been born, educated and worked there for more than half my life, the press, including radio, were most helpful. So far I haven't looked into publishing in other languages but if the series continues to be successful that's something I will examine. 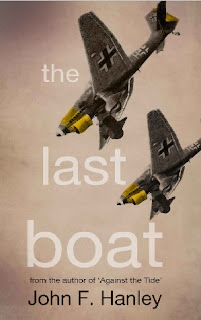 The Last Boat
The Last Boat is the second novel by author John?Hanley, and the follow up to Against the Tide

The book opens in the middle of the greatest naval disaster in British history when the Luftwaffe bombs and sinks the hastily converted Cunard liner, HMT Lancastria. In the ten minutes of bombing and strafing, over 5,000 troops and civilians are blown apart by the high explosive bombs. These losses represent more than one third of all members of the British Expeditionary Force killed in the nine months of war so far. The news is so shocking that Churchill suppresses it and the report into the loss will remain sealed until 2040.

But this is only a beginning for Jack, Saul, Miko and Lt Commander Brewster who survive the attack and must fight their way back to Jersey through the German advance. During this journey they encounter a cargo so important that only Miko, the refugee physicist, really understands what could happen should the Germans intercept it.

The Last Boat will appeal to readers of historical fiction who appreciate the complexities and uncertainties facing young adults as their world is forever shattered by war.

Order the Book From: Amazon 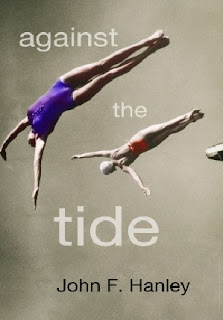 Against the Tide
It’s July 1939 and even though Poland is trapped between Adolph Hitler and Uncle Joe Stalin, everyone hopes war can be avoided. On the island of Jersey, eighteen-year-old Jack Renouf is forbidden from associating with his own Uncle Fred because of his dangerous Communist views and salacious liaison with his Spanish mistress. Caught in his own velvet trap between outrageous Caroline and secretive Rachel, Jack doesn’t pay too much attention to international affairs especially during this glorious summer when, despite the darkening horizon, everyone is in holiday mood.

In his final days at school, Jack is focussed on breaking the one-minute barrier for the 100 yards freestyle so that he can get into the British swimming team for the 1940 Helsinki Olympics. Desperate for those last few seconds, he listens to Miko, an enigmatic Jewish refugee who works as a waiter in a local hotel but claims to have trained the Romanian water polo team for the Berlin Olympics. He persuades Jack to try some new techniques, which he promises will bring him success. But everyone else at the swimming club is suspicious of Miko who always wears the same white tee shirt and never seems to swim.

An arrogant Dutchman on holiday in the island bullies Jack during a water polo match and his carefully constructed sang froid boils away as he retaliates viciously and has to suffer the disciplinary consequences.

Order the Book From: Amazon - Barnes and Noble
Author Recommended by: Anne Allen
Anne Allen is a romance mystery Author. She hails from the UK and analyzes people. A great background for a successful writer.
Check out Anne's Author's Spotlight.

Posted by James Moushon at 7:24 AM